Plumbing can be an exciting profession, one filled with encounters and situations that many people would find unbelievable. Since plumbers interact with the general public on a near-daily basis, some of the stories they encounter can be downright hilarious. These are just a few stories we’ve heard that are almost too crazy to believe. 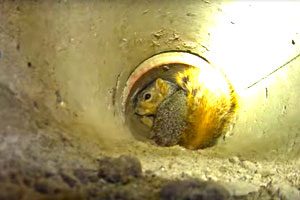 Most of the time, when a plumber gets called to a home for a blocked toilet issue, it’s because of a drain blockage the owner can solve themselves. These issues are usually pretty easy to solve with the right tools and can be finished in just a few minutes. And whatever the mystery object was that caused the blockage is removed or put far enough down the system that it leaves the house entirely. Sometimes, the mysterious blocking object requires special skills.

A plumber by the name of Ed Ernest was once called for one such blockage, but the mysterious object wasn’t any of the usual suspects. It was, in fact, a squirrel. When Ed arrived at the home, he was brought up to the toilet, only to discover a squirrel’s tail sticking out of the bowl. He tried to pull on the tail, but the squirrel, against all odds, was still alive! Knowing he needed to be careful, and quick, he removed the toilet from the home’s water supply in its entirety. This was the easiest step.

After disconnecting the water, Ed found the water-logged squirrel poking its head out of the other end of the pipe. He took out his auger and, with some care and precision, he managed to get the head and two front paws of the poor squirrel out of the other end of the toilet. Grabbing the squirrel by the paws, Ed pulled him out completely. The poor thing was in shock but still alive, so Ed took it outside and put it on a nearby tree. In the end, the toilet and the squirrel were saved.

2. The Plumber Did It 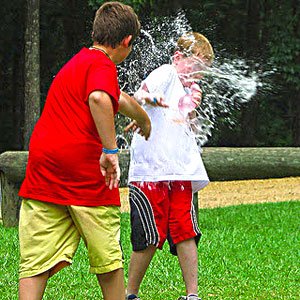 Most plumbers are used to being accused of over-charging for their services, especially when it isn’t the case, but that’s not the only misdemeanour they can be charged with. Take this next story, for example.

The plumber arrived at a well-to-do home in the nice part of town for plumbing rough-in for a new bathroom. The work itself went very well, but the clients weren’t the nicest of people. In fact, the wife seemed to think the work wasn’t what she wanted, a feeling that the husband did not share.

Fast forward a couple of weeks, to when the wife calls the plumber to complain about shoddy work. According to her, the rough-in led to massive leaks that affected not only the new bathroom, but the ceilings below. Naturally, the plumber came back to investigate and, after receiving a particularly memorable tongue-lashing from the wife, headed into the bathroom to investigate.

Upon his inspection, the plumber was at a loss for what happened. The water didn’t seem to be leaking from anywhere in particular. In fact, it seemed to be randomly splashed all over the entire room. It was a mess, but something didn’t add up.

The answer came when the couple’s daughter poked her head into the bathroom. “Are you here because Billy and Tommy had a water balloon fight in the bathroom while mommy was taking a nap?” she asked, “It was really bad. She put all of the broken balloons in my garbage can. Look how many. Mommy told daddy that the stupid plumbers did it and my daddy is gonna sue everybody.”

Turns out the two boys had a water fight in the bathroom and, instead of admitting this to her husband, the wife decided to blame the plumber and make a show of his supposed incompetence. Of course, the plumber soon found the two full garbage bags of broken water balloons and, upon discovering she had been outsmarted, he was escorted from the premises.

He never heard from them again.

Every plumber has a version of the “I went over and had to flip a switch” story, but this one takes the cake.

A plumber was called to a downtown bank to investigate a hot water issue. He was escorted to the tank, which was easily over twenty years old but seemed to be in perfect condition. Upon talking to the bank manager, the plumber discovered that the tank had never once produced hot water in over twenty years. Electricians and plumbers had been called in initially, but they couldn’t seem to figure out the problem. The bank employees soon got used to having no hot water in their kitchenette, but the bank finally agreed to replace the heater that year.

The plumber looked at the tank, saw the switch was in the off position, and flicked it on. It’s been working perfectly ever since.

Some of the best plumbing stories aren’t actually the gross ones you’d expect, but simply unusual circumstances. Absolute Draining & Plumbing interact with people every day, and that comes with a whole wealth of stories. If you have a friend who’s a plumber, it would certainly pay to take them for a drink and hear some of the things they’ve encountered over the years. They may be a little gross, but they’ll certainly give you a laugh.

Professional plumbing company in Toronto providing drain and plumbing services 24-hours a day, having an emergency? Give us a call.