Galvanized pipes were used regularly in the installation of Toronto home plumbing systems because they provided a few very useful traits – they are long-lasting and relatively inexpensive. The problem is that long-lasting does not mean indefinite, and thus the need to remove galvanized pipes. As a Toronto plumber we’ve encountered countless issues with galvanized pipes. As the name suggests, galvanized plumbing pipes are steel pipes that have been treated with a layer of zinc in order to inhibit rusting. However, as time passes this zinc layer slowly erodes away leaving the bare steel open to the water which inevitably leads to rusting and the potential for other plumbing problems.

How do galvanized pipes fail 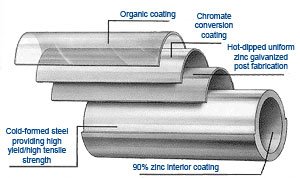 Although these pipes have an extensive lifespan, approximately 50 years, they will eventually fail. The failure is caused by the pipes rusting away from the inside out, not only will they rust away causing weak structural properties causing leaks and collapses but they will also develop calcium deposits inside of the pipe. With the right combination of neglect and lack of home plumbing inspection galvanized pipes can eventually become completely clogged with calcium build up resulting in low water pressure and rusty water.

The problem with galvanization

There are problems with pipes that have been galvanized that present themselves at the pipes corrode; lowered water pressure, rusty water, and possible lead contamination.

As the pipes internal diameter becomes narrower due to imposing calcium build up the water has a much smaller path to traverse. This restricted flow reveals itself as lowered water pressure since there is simply not enough water making it through to access the demands placed upon it. The only way to remedy this problem is to completely replace the galvanized plumbing that has been affected.

Another problem with this style of piping is that rust can actually end up in the water itself. This will be obvious if the water appears brownish or rusty coloured after it has been left off for a long period. This is due to the water sitting in the pipe long enough to accumulate enough rust to make itself visible to the naked eye. Needless to say, you do not want to be drinking or cooking with rusty water.

“How can I tell if my home has galvanized plumbing?”

The easiest method to solve the problem of corroding or rusting galvanized pipe is to simply have it removed. There are a myriad of local plumbers that can solve this task for you, if you’re in Toronto you can call up your local plumber in Toronto – we are extremely skilled in the removal of galvanized pipes and installation of replacement piping such as copper pipes, ABS pipes, and PEX piping.