The standards for the material used in building and renovating homes are always changing. In many cases, it is because a better product has been developed, but in others, it could be that a type of material turned out to not be as good as everyone thought it was.

One such product that turned out to not be as good as it first was thought to be is Kitec plumbing. In this article, we are going to take a closer look at Kitec plumbing, the issues surrounding this product and whether it is something you need to worry about. As an experienced plumber in Toronto we’ve seen a number of these installs and can help you solve this problem should you require professional assistance.

Kitec installed in a home

Kitec is a brand of PEX or plastic piping that was used in the hot and cold water supplies for homes.  Kitec seemed like a good alternative to copper because it was believed that it offered a good level of durability and flexibility while also being less expensive. It gained popularity in the United States and Canada because it was more cost effective than using copper and it was easier to install. However, it was soon recalled after defects and issues associated with this type of plumbing were discovered.

When was Kitec plumbing used? It was manufactured by IPEX between the years 1995 and 2007, so if your home was built or had any major repairs between those years, it could be using the Kitec pipe system.

If your home was built or renovated during the years that Kitec was in production, then you may want to check to see if your home has any of this piping. The first point to indentify is whether your home has any plastic piping. A good place to look for this type of pipe is near your hot water heater, under sinks or in the mechanical room.

The plastic piping would usually be colour coded, with blue being used for cold water lines and red or orange being used for hot water. While blue, orange and red were the most popular colours, it also came in gray, black and white.

If you see any plastic plumbing like this, then you will want to look closer to see whether it is Kitec. If it is Kitec, it will usually be marked with one of the following brand names: Kitec, AmbioComfort, KERR Controls, PlumbBetter, WarmRite, IPEX AQUA, XPA, Kitec XPA or Plomberie Améliorée.

Examples of what to look for: 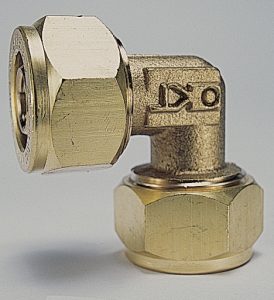 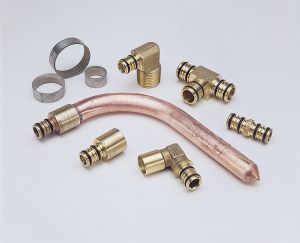 Another example of what Kitec plumbing fittings look like 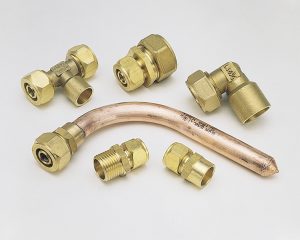 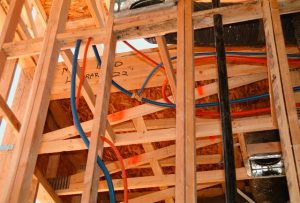 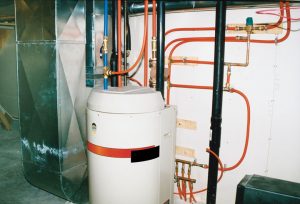 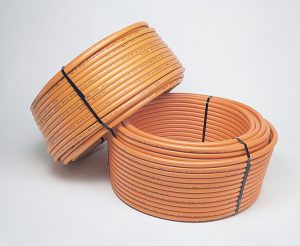 Rolls of Kitec piping before being installed

There are people who are considering buying a house with Kitec plumbing; we strongly recommend considering changes to your terms if this is the case to account for the cost of replacement.

It’s become such an issue homeowners are posting on YouTube regarding their plumbing. This video below talks a bit about Kitec but also is a great illustration of what these pipes look like when installed in a home. This user describes a home where the plumbing failed after on 7 years, needless to say, homeowners should be concerned. He poses an idea that Kitec might simply have quality control issues, an interesting concept but one that most people will likely not want to gamble with.

The Problems with Kitec

So plumbers and builders liked Kitec because they were told that it was resistant to corrosion, and it was much more cost effective than running copper lines. However, there turned out to be problems that made it less than suitable for use in homes.

After Kitec had been in use for many years, it was found that it was prone to premature failure. This was especially true when the lines are subject to high pressure and higher temperatures. Under these conditions, the pipe may being to deteriorate, and eventually, this would lead to failure. In some cases, it might just be a leak, and in others, the pipe could burst.

Since this type of pipe is more likely to fail, homes that have Kitec plumbing could be at an increased risk for flooding. The only way to resolve this risk is to have the Kitec plumbing replaced with copper lines, and this is a repair that can be expensive.

Since Kitec plumbing failed to live up to the claims of the manufacturer, it has been the subject of many lawsuits. Most notably, a cross-border class action suit was filed against the manufacturer to cover the cost of replacements and repairs relating to the defects of the product. Websites have popped up aiming to supply users of the Kitec system with a notice package helping them navigate the suit.

Plumbing That Does Not Perform As It Should

While there have not been a high number of Kitec plumbing failures, the suit addresses the increased risk of premature failure and that the plumbing does not perform as should be reasonably expected by a homeowner. Since it is expected that failures will occur more frequently in the future, the intention of the Kitec plumbing lawsuit was to recover funds that could be used to cover repairs, replacement and potential damage.

The case was settled for USD $125,000,000 back in November of 2011. The settlement money was used to set up a claim fund for people that have experienced plumbing failures related to Kitec plumbing. If you find Kitec Plumbing in your home, you have until January of 2020 to file a claim with the settlement fund.

Does Kitec Plumbing need to be Replaced?

At this point, you might be asking what you should do if you find Kitec plumbing in your home. To start, you want to file a claim with the Kitec settlement fund. Whether you have experienced problems or not, this is a good precautionary step that will ensure that you are eligible if a problem does occur.

With the increased risk of premature failure, you may also be anxious and wondering whether you should take the step of having the Kitec plumbing replaced. The truth is that you do not necessarily need to have the plumbing replaced. As long as it is not subject to high pressure or temperatures above the 77°C rating from the manufacturer, it can last a long time without problems.

The recommendation for homes with Kitec plumbing is to be aware of the potential for pipe failure and to keep your eye out for signs that may indicate a need for replacement. Signs that can indicate a problem include a drop in water pressure, discolouration or blistering of the pipes and corrosion around Kitec fittings. As a smart precautionary step, you may want to hire a plumber to come out and inspect your plumbing to make sure everything is in order.

It is always a letdown when a product that is supposed to be an improvement ends up being worse than what it replaced, but it does happen. Kitec plumbing is just one example. Unfortunately, it was in use for more than a decade before the problems were identified, and now thousands of homeowners have to worry about pipe failure as a result.

How Much Does It Cost To Replace Kitec Plumbing?

For most large scale replacement projects, including townhouses and condos, the cost can range from $10,000 upwards to $15,000. In some cases, one bedroom units can be $5,000. The cost depends largely on the required work and these numbers are only a very loose guideline.

If you have Kitec in your home, and are unsure as to whether it needs to be replaced, contact a professional plumber for Kitec plumbing replacement service. A quick inspection can determine whether the pipes need to be replaced, and the plumber will be able to provide you with a number of options concerning what you can do to resolve your issues.

Andrew Olexiuk - Your Toronto Plumbing Expert
Andrew has over 20 years of experience as a plumbing contractor. He is co-owner and operator of Absolute Draining & Plumbing, a professional plumbing company serving residential & commercial properties across the Toronto, Ontario region.
Recent Posts
Showing 5 comments