As much as we may need water, it sure can cause us a lot of problems. This is especially true when it comes to the structures that we build and the management of land. Through the centuries, humans have developed all sorts of ingenious ways to get water where we want it, and to move it away from places where we don’t want it.

One of the most common ways to protect a property against water damage is the use of a French drain. As a drain & plumbing contractor with many years of experience, we’ve installed our fair share of french drains. Also known as a weeping tile, sub-surface drain and a whole host of other names, this style of drainage system can be used in a variety of different situations. In this post, we are going to take a closer look at French drains, the type of drain service they receive, how they work and the reasons that some properties might need them.

What is a French drain? 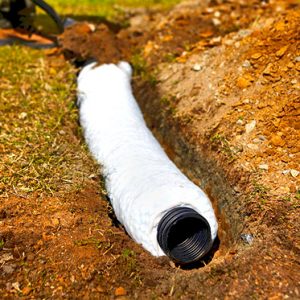 French drain being installed at a home in Toronto

As you may have guessed, a French drain is a type of drainage system. The primary purpose for most French drains is to manage surface water and groundwater. With most French drains, the idea is to take water that could threaten a structure, and move it to a place where it is no longer a threat.

You may have seen a French drain before. It looks like a trench that has been filled with gravel. Under that gravel, there is likely to be perforated drainage line, and if you were to go to the discharge end of the French drain, you would see the end of the perforated pipe.

You’ll often find the terms “French drain” and “weeping tile” used interchangeably. While this is usually acceptable, there are some slight differences between the two. A French drain is typically installed just below the surface, and its main intent is to prevent the over-saturation of soil. A weeping tile is a type of French drain, and it is a drain that is built to protect a structure against hydrostatic pressure. Since they are often used to protect the foundation of a structure, the pipe is usually much deeper in the ground.

If you are using the terms interchangeably or hear someone else do, it is no big deal. It has generally become accepted that they both refer to the same type of drainage system, and people will know what you are talking about either way.

How does a French drain work?

Whether you are talking about a French drain or a weeping tile system, the drain will work under the same principles. Gravity will always cause water to flow downhill, and the flow of water is always going to follow the path of least resistance. The operation of a French drain relies on these facts of nature to manage the moisture in soil.

As I mentioned before, a French drain is made from a piece of perforated pipe that is laid in a trench and surrounded by gravel. The gravel or stone in a French drain serves multiple purposes, but the most important feature of this packed gravel is that it is more permeable than the soil on the surrounding land. In technical terms, the gravel or stone in the drain would be known as the envelope. The increased permeability of the envelope allows water to flow more easily, and this draws the moisture from the surrounding soil, making the trench the path of least resistance. 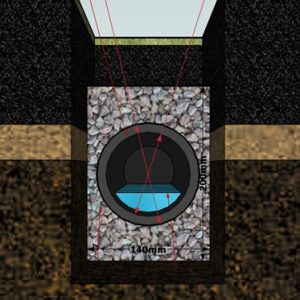 French drains have been around for quite some time, but a modern French drain is also likely to have some type of landscaping fabric covering the gravel. The purpose of this fabric is to prevent the growth of weeds and to reduce the amount of sediment that can run down into the trench, and potentially clog the French drain.

Different types of pipe might also be used in the construction of a French drain. Some might use PVC that comes with holes predrilled, and in others, it is common to use a flexible drainpipe with small slits in the side. The choice between the two can depend on the exact application, but PVC tends to be more durable. You can also find pipe that is encased in a type of landscaping fabric.

A French drain will also be graded with a slope that descends away from the area from which you want to remove the moisture. This slope is where gravity comes in. The sloping grade of the trench, and therefore the pipe, will cause the water to run downhill to a discharge point. So you have the gravel that makes the trench the path of least resistance for the water, and you have the grade to take advantage of gravity, and make the water flow in the intended direction.

The discharge point of a French drain will depend on the application for which it is being used. You obviously want to direct the water to a location that is away from whatever you are trying to protect from groundwater, but there could be various laws and building codes that may prevent you from placing the discharge in certain locations.

For a weeping tile system, it is very common to have the end of the pipe discharge into the pit for a sump pump that is in the basement of the home. Some French drains might discharge into a local storm sewer, and others might just discharge at a different location on the property. One point that is almost always important in this regard is to avoid a discharge point that will cause the water to flow onto an adjacent property.

When is a French Drain Needed?

One of the best things about French drains is that they can be used to relieve a number of problems with ground water or surface water on a property. For the purposes of this post, we are going to stick to some of the more common uses for French drains.

A French drain or weeping tile system can be one of the most effective solutions for prevent water from getting into a basement and for protecting a foundation against water that may penetrate the concrete.

Surface water can cause all sorts of problems for a property. You might have a low-lying area of your lawn that gets pooled with water or ends up soggy, or you might find that there are problems with soil erosion at some places.

In situations like these, a relatively shallow French drain can be used to direct the water away from these problem areas, and it can prevent problems with pooling water and soil erosion. In some cases, the French drain might be installed near the problem area to drain the water away, and in others, it can be used to divert water that is running downhill into the low-lying area.

A retaining wall can increase the usable land on a property, and it can also prevent erosion. The retaining wall should have few problems holding back the soil, but you need to protect your retaining wall against the pressure that can build up if that soil becomes saturated with water. To do this, you will need some type of toe drain for the wall.

With most retaining walls, the toe drain will follow the same design as a French drain. As water runs downhill toward the wall, it can put an immense amount of pressure on a retaining wall. This could compromise the integrity of the structure. In this case, you would build a French drain behind the wall near the footing.

How deep do you dig a French Drain?

If you are talking about a weeping tile system, you would want the French drain to start below the level of the footing. It is the same with a French drain that is intended to protect a retaining wall. If you are trying to manage problems with surface water, then you have a little more play with the depth; in general, the recommendation is about eighteen inches to two feet.

How much does it cost to install a French drain?

As it is true with any construction project, the cost of installing a French drain will vary depending on a variety of different factors. Along with the exact application for which the drain is being used, factors like the length and depth of the drain can affect the cost. In addition to that, there might be soil conditions that might play a role, and you also have to consider the materials being used.

With all of these factors being accounted for, the cost can vary significantly. If you are pricing by the foot, it could run you anywhere from $12 per linear foot to $40 per linear foot. If we are talking about the average cost of completion, $1,000 is probably a good starting minimum cost, but depending on the size of the job, it could easily run to several thousand dollars.

How do you unclog a French drain?

As with any drain, a French drain does have the possibility of getting clogged. Sediment and other types of debris can build up in the line, and this can cause the water to backup. You can also find problems where a tree root grew into the line to form an obstruction. When this occurs, it can cause the water to backup, and this can cause flooding to the area that you were trying to protect.

A French drain should be installed with cleanouts. These are points that provide access to the pipe, and allow you to clear any clogs. You should have one at the highest point in the French drain, and you may need others depending on the length of the drain and changes of elevation to the drain.

Once you have access to a cleanout point for the French drain, it can then be cleaned in much the same way that you would clear any other drain. A drain snake can be used to clear a French drain or you could use water jetting to clear the line.

If you are having problems with your French drain, it might help to hire a professional. Some of these clogs can be very tough to clear, and in some cases, there is a risk of damaging the pipe. A professional will know how to clear the line and prevent damage, and they might even be able to use a drain camera to inspect for damage.

As an additional point, some problems can occur when a section of the line collapses. This is likely to result in the system backing up, and it will require drain repairs. If you find that your French drain is clogged and you can’t get it clear, this could be an indication of a collapsed line.

A French drain can be the ideal solution for a range of different problems connected to groundwater and surface water. A good French drain can protect the foundation of your home, and it can also protect the value of your property. If you need a French drain installed, it is important that the work is done right. If installed improperly, it will not perform in the way that it needs to, and it could end up costing you more in repairs, replacement and water damage.

Andrew Olexiuk - Your Toronto Plumbing Expert
Andrew has over 20 years of experience as a plumbing contractor. He is co-owner and operator of Absolute Draining & Plumbing, a professional plumbing company serving residential & commercial properties across the Toronto, Ontario region.
Recent Posts
Showing 3 comments